At the Heart of a Bay Area Revival

An Opening of the Field: Jess, Robert Duncan, and Their Circle
Curated by Michael Duncan  and Christopher Wagstaff
Pasadena Museum of California Art

ART HISTORY can be a dry affair: a reinterpretation for the umpteenth time of the Mona Lisa’s smile. But sometimes it can bring to light an undervalued artist or an overlooked cultural moment. An example of the latter is an exhibition titled An Opening of the Field: Jess, Robert Duncan, and Their Circle, whose importance extends beyond the San Francisco Bay Area and American cultural history to encompass GLBT history as well. The show’s title refers to Robert Duncan’s 1960 volume of poetry, The Opening of the Field, whose cover sported an illustration by his partner Jess. The word “field,” argues co-curator Christopher Wagstaff, is “a metaphor for the cosmos or an expanding state of awareness.” After runs at New York University and American University in Washington, D.C., the show has now arrived in southern California.

Although a few of the mid-century Bay Area artists represented here are somewhat well-known, the majority are hardly household names. Among them are Helen Adam, George Herms, Edward Corbett, Eloise Mixon, Philip Roeber, Ronald Bladen, Harry Jacobus, and Virginia Admiral (known mainly as actor Robert DeNiro’s mother). The show illustrates and gives coherence to their common bonds, providing, perhaps for the first time, an understanding of their ideas and influences. But it primarily brings to the fore the two men at the center of this mid-20th-century cross-fertilization for whom life and art were inseparable.

Jess started life as Burgess Franklin Collins, a nerdy if handsome introvert, the product of a conservative family. A chemist, he fulfilled his service during World War II by helping to produce plutonium for the Manhattan project. “When they dropped the bomb I knew science was made by black magicians,” he later said. This theme, society’s idolization of scientific advances at the cost of spiritual awareness, persists throughout his work. In the late 1940s, Jess had a dream about the coming annihilation of the world. Shortly thereafter, he left science, severed ties with his family, moved to San Francisco, became simply “Jess,” and began to study art. A heavily wax-crayoned work on paper from 1959 shows his continued fascination with mass destruction. The darkened back of a man is seen against a vivid sky, his right arm pointing to a fiery mushroom-like column of light in the upper right. The sun is lower left and off-center. The thickly textured piece, echoing Van Gogh in its style and Albert Pinkham Ryder in its allegorical content, is titled Qui Auget Scientiam Auget Dolorem (“Who Increases Science Increases Grief”).

Robert Duncan, the more outgoing of the two, was the adopted child of Theosophists. His parents believed their gifted son had lived in Atlantis in a past life, and they encouraged his early interest in the arts, literature, and philosophy. While both were Californians—they met in San Francisco in the summer of 1950—Jess and Duncan’s backgrounds could not have been more dissimilar. And yet, despite Duncan’s absences due to teaching assignments and lecture circuit tours and Jess’s preference for staying at home and working, in their 37 years together (ending at Duncan’s death in 1988), they complemented and supported one another creatively. They were a model for many friends—straight, gay, and otherwise—of how to be in a committed relationship. 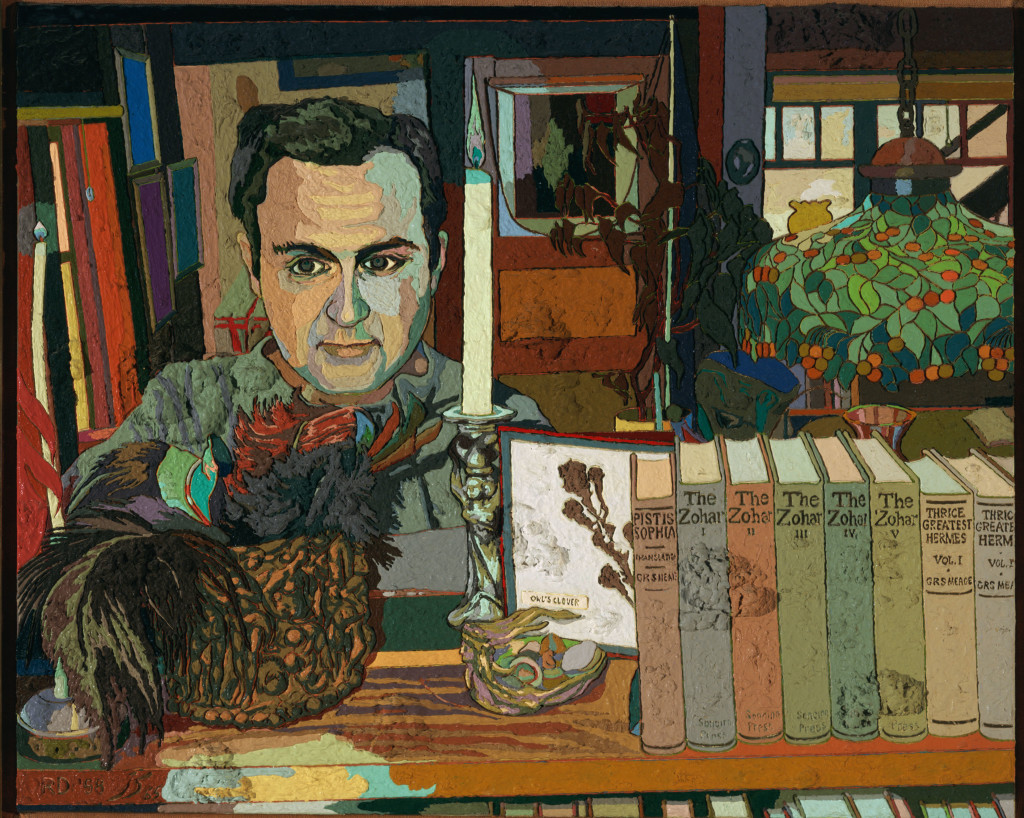 In the 1940s, before settling in San Francisco, Duncan had traveled abroad and spent a few years in New York. In a film shown in the exhibit, Duncan describes how he tried unsuccessfully to find employment there. Not wishing to hide his homosexuality, he was denied jobs because of it, or, on the other hand, was offered employment because of it. In the end, he preferred to wash dishes. While sexual freedom was certainly not a fact of everyday life in the Bay Area in the post war years, the atmosphere in San Francisco, compared to the rest of America, was somewhat more conducive to “doing your own thing.”

At the entrance to the exhibit, a short documentary film takes the viewer inside the house that Jess and Duncan shared in San Francisco’s Mission District. It was a world unto itself, filled with books and art, including Jess’s paintings and collages (or “paste-ups” as he called them) and Duncan’s large, wax-crayon-on-paper drawings. Also on the walls were works  by friends including: Wallace Berman, best known for his complex photo collages; Edward Corbett, a great and under-appreciated West Coast abstractionist; the eccentric poet and collagist Helen Adam; George Herms, who created startling mixed-media assemblages from found debris; and R. B. Kitaj, an anomalous figurative artist who drew on influences as disparate as Ezra Pound, James Joyce, and Jewish history and culture. Some of the works were gifts or were traded for another’s work. The commercial sale of art was not part of this crowd’s vocabulary.

In mid-century America, the focus was largely on East Coast artists, notably the abstract expressionists such as Jackson Pollock, Willem de Kooning, and Mark Rothko. Although touted as the first flowering of an authentically American art movement, abstract expressionism had multiple roots in Europe. Inherent in it was a rather doctrinaire view of art history. It sought to cleanse the canvas of all narrative information, such as any figurative components. The painting was to be distilled down to its purest elements of color and line. In contrast, artists on the West Coast were less confined by orthodoxies. To be sure, the West had its share of great abstract expressionists—Clyfford Still, another of Jess’s teachers at CSFA, being the best known. But Still was tolerant of artists who deviated from pure abstraction in their work, as did the circle around Jess and Duncan, who borrowed from a diversity of sources.While two-dimensional works comprise most of An Opening of the Field, the show also includes stone sculptures, assemblages, Duncan’s handmade books of poems, and a 37-minute film by filmmaker–poet James Broughton. “The Pleasure Garden,” both satire and allegory aimed at societal repression, perfectly sets the stage for the exhibit. Made in 1953 and shot in London’s Crystal Palace Gardens, Broughton’s Chaplinesque short film follows several eccentrics as they cavort in an Edenic setting in which their nemeses, Col. Pall K. Gargoyle and Aunt Minerva, attempt to rein in any kind of physical or emotional expression. In the end, the two moralizers are expelled from the garden and the inhabitants can again pursue their desires.

The art of Jess, Robert Duncan, and many of those affiliated with them was infused with Romanticism and myth. Writes Christopher Wagstaff: “myth for these two artists involves the disclosure in time of what is primordial and time-free.” Dreams, too—as well as a belief in the transformative importance of the imagination and the idea that art can involve joyful play—characterize their works. For them, art and life were interchangeable: a canvas, a drawing, a poem was not so much a thing confined by its finishedness as something alive and ongoing. In a statement regarding his æsthetics, Duncan asks, “Why should one’s art then be an achievement? Why not more an adventure?”Of the two, I think Jess was the stronger and more original painter. But then, Duncan was first and foremost a poet. (A complete collection of his poems is to be published soon.) Duncan’s writings, with their allusions to dreams, mythologies and fairy tales, clearly informed much of Jess’s work. The two often collaborated, with Jess providing the visual elements for Duncan’s poetry, such as Jess’s ink-on-paper illustration for his 1955 poem “The Song of the Borderguard.” With its spare lines and monochromatic blacks and whites perfectly balancing one another, it recalls the work of the late-19th-century artist Aubrey Beardsley and art nouveau.

Jess’s relationship with Duncan also contributed to Jess’s use of sexual imagery. His A Thin Veneer of Civility (Self-Portrait), an oil wash on canvas from 1954, is in its soft beauty among the show’s most striking and powerful works. From a distance, the nude, boney male figure in the long vertical canvas—its predominant colors muted browns, yellow, and a warm red—appears to be leaning back and… what? Urinating? Masturbating? On closer viewing, we see that he is actually using a ball of string to play with a cat that’s turned over on its back at his feet. Above in the upper right is a faint image of his lover Duncan’s head. “Tender, tongue-in-cheek, and pointedly sexual, the painting blithely breaks nearly every taboo of its time,” remarks Michael Duncan in the superb exhibit book.
Jess said that a dream is the perfect collage, the elements artlessly and seamlessly fitting together, conveying the dream’s own logic. His “paste-ups” present what is undoubtedly a dreamlike world. Filtered through a Freudian prism on the interior psyche, collage has its roots in Cubism, evolving and flourishing under Dada and Surrealism, as seen in works by earlier 20th-century artists such as Kurt Schwitters and Max Ernst (to whom Jess acknowledged a debt). It is arguably the most narrative of all modern art forms. Like a novelist, the collagist has a story to tell. But the process, rather than being preconceived, is somewhat serendipitous. The collage elements—magazine cut-outs, pieces of fabric, found objects—are often haphazardly assembled, products of the mind’s conscious and unconscious riffing off visual juxtapositions and puns.

Through collage, Jess, as a gay man and a misfit in 1950s America, was able to express his alienation, anger, anxieties, and homosexual longings. He used contemporary advertising materials and text—for example, ads for shaving cream and sportswear. He found, and sometimes made explicit, the underlying homoerotic elements of this imagery. In some collages, handsome, muscular and unclothed men appear in sexual positions. He used satire and humor fearlessly, poking fun at himself and his own urges. Defying convention, he could bend hetero-oriented material into homoerotic juxtapositions, exacting a kind of revenge upon the dominant culture that had rendered invisible his preferred mode of erotic expression.Click here to edit this page.