A Certain Gorgeous Bleakness
by James Cassell
May 4, 2018
The Gay and Lesbian Review

MAKING ART IS DIFFICULT. Doing it when you’re struggling with an illness you know is going to kill you is a higher level of achievement. “How do I embrace this thing and make it OK, or make myself able to live with it and produce and go on from there? How do I live every day with despair?” wrote painter Hugh Auchincloss Steers after he was diagnosed with HIV at age 25. The answer was: by constantly painting canvases depicting men who are ill, men in partial or complete undress, ambiguously intimate in their private spaces. Steers did this for the remaining seven years of his life, almost up to the day he died: March 1, 1995. 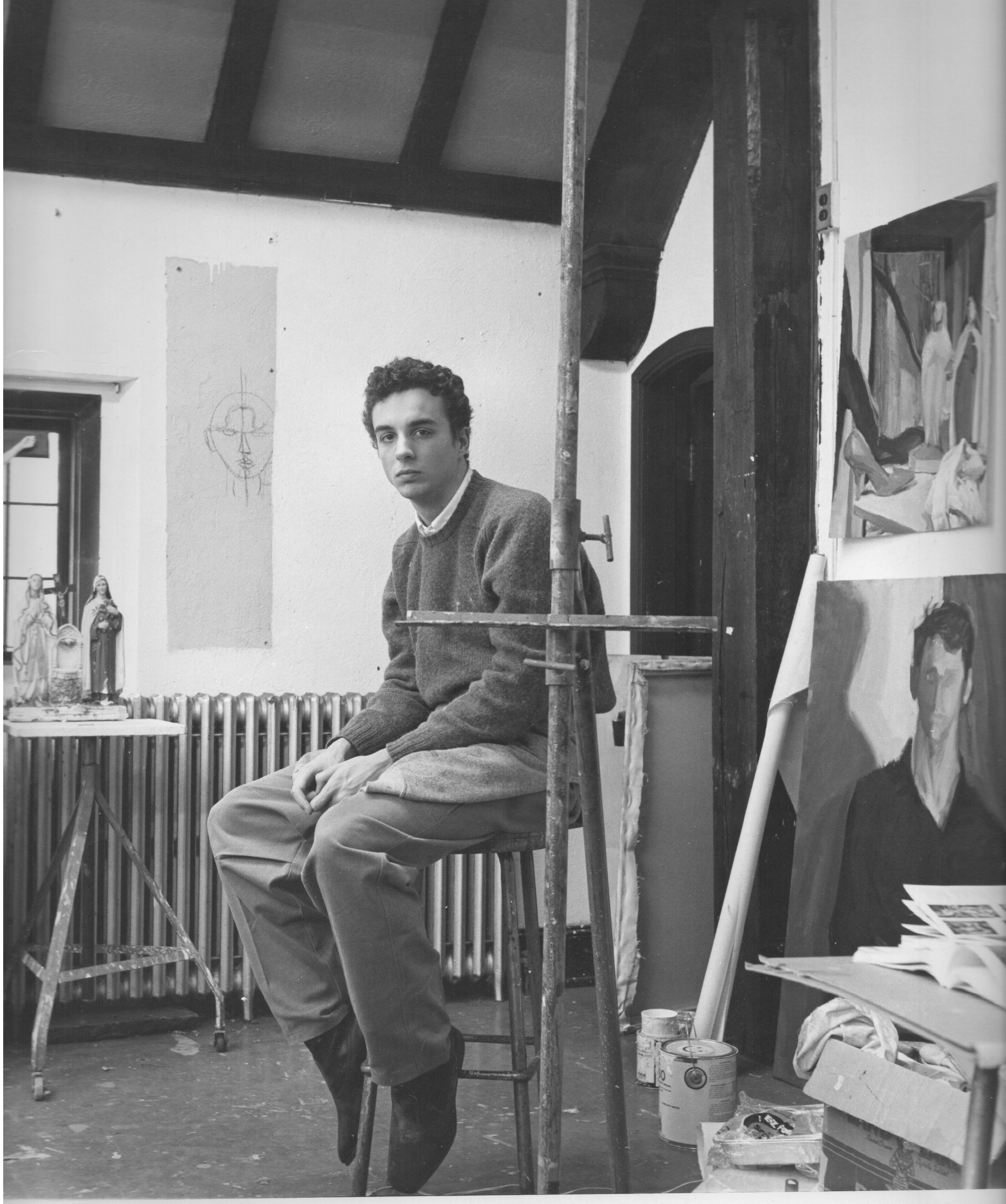 The raw force and beauty of Steers’ figurative painting is on display in a solo exhibition of work not shown previously, at Alexander Gray Associates through July 27, 2018. (Shown right: Auchincloss  Steers in his studio). The Chelsea gallery, which represents the artist’s estate, last exhibited Steers’ work in 2015. In fall 2017, two of the artist’s works were included in AIDS at Home: Art and Everyday Activism, an exhibit at the Museum of the City of New York. In 2015, Visual AIDS, a New York-based organization dedicated to HIV/AIDS awareness through visual art projects, published Hugh Steers: The Complete Paintings, 1983–1994, a comprehensive look at Steers’ work with accompanying essays, including author Cynthia Carr’s profile of the artist.

Carr discusses Steers’ artistic influences as well as the complexity of his personal history and the troubled relationships he had with his family despite his glamorous WASP pedigree. As a gay man at Hotchkiss, an exclusive boarding school in Connecticut, Steers felt alienated. The friendships he made there were mostly with women who also felt as though they were on the outside looking in. One new classmate came to Hotchkiss from a school in Madrid. On her first day, she followed the custom of not bringing books into the dining room. Seeing this, Steers went over to her and said, “You dropped your books with such panache. I have to meet you.” Carr reports they became best friends.

Born in Washington, D.C., to Nina Gore Auchincloss and Newton Steers, a mutual funds entrepreneur and later a U.S. Congressman from Maryland, Steers grew up in the affluent suburban enclave of Bethesda, Maryland. He was a graduate of Hotchkiss and Yale, the grandson of financier Hugh D. Auchincloss, who owned Hammersmith Farm in Newport and who was also the stepfather of Jackie Kennedy (Steers and JFK Jr. played together in Newport in the summer), a descendant of statesman Aaron Burr, and the nephew of American author Gore Vidal. In ways similar to Vidal, he considered all of this to be a very mixed blessing. He sought to make his way as a painter largely independently of his social connections. This extended to numerous periods in his short artistic career as he struggled to pay the rent on his rundown apartments that doubled as studios.

At first glance, a Steers painting is a tipoff that all is not right in the world. AIDS is often lurking, but to suggest that his paintings are solely about his own illness—a death sentence for thousands of mostly gay and bisexual men in this period—is to miss their broader significance. At the same time seeing them strictly through a political lens is equally reductive. If anything, as figurative paintings, they were anomalous if not retrograde at a time—the 1980s and ’90s—when the fashion was more toward conceptual and performance art, or photography, as illustrated by the popularity of Robert Mapplethorpe. Steers was attuned to the art that was in vogue, but he was doggedly committed to representational art and to depicting the male figure in a centuries-old tradition of the great masters, such as Caravaggio, Velázquez, and Goya (whose influence is evident in his work), and of more recent artists like Edward Hopper and David Park. In a 1992 interview, Steers commented on the mood in his paintings: “I think I’m in the tradition of a certain kind of American artist—artists whose work embodies a certain gorgeous bleakness.”

One of the bitter ironies of the AIDS epidemic is that it began at the end of the very decade, the 1970s, when gay men had created a community for the first time, and on a large scale. Gay liberation, though its roots ran farther back, essentially came out of the radical politics and cultural usurpations of the previous decade. It flowered with Stonewall and in the fervor of gay pride celebrations on Castro Street, in the Village, and in other large urban centers. Gay publications such as The Bladein Washington, The Advocate, which originated in Los Angeles, and San Francisco’s Gay Sunshineemerged to meet the interests of a growing audience. A new, openly gay literature arose with books by young writers, such as Andrew Holleran’s Dancer from the Danceand Edmund White’s Nocturnes for the King of Naples.

Tribalism had been an element of hippie sit-ins and be-ins and other gatherings in the ’60s. Parks were filled with young men and women dancing to guitars and drums, the air thick with incense and marijuana smoke. A little later, hordes of shirtless gay and bisexual men would lose themselves in the crowd at all-night discos or flock to the beaches at Fire Island for entire weekends. Steers’ work, with its allegorical references—some of the figures wear paper bags over their heads; black cats and crows enter these spaces—is a reminder of how drastically things would change. AIDS was sending men back into isolation and darkness. The tribe was splintering. Does so-and-so have “it”? Could I catch it from him? These were questions that people, both gay and straight, were asking themselves in the early years of the epidemic.

The mood in Steers’ paintings, which usually involve two men in relation to one another, is antithetical to the crowd euphoria of the pre-AIDS period. A Steers painting isn’t about “us”; it’s more about “you and I.” Nor is it about the anonymity of the baths or the music- and drug-induced highs of the bars. These men are fenced in, their lives intersect; they are consigned to one another. They are lovers, or have been; or per- haps they were acquaintances brought together because, as a result of being sick, they were going broke. In many cases they appear to be dying. They inhabit a multi-layered emotional zone very different from that of the packed dance floors or the sun-drenched beaches of a few years before.